Whew, what a time I had with dad, there is so much to tell you, but with my current jet lag I'll tell you some now and continue later.  Dad helped me journal the trip so I can remember everything I did.  Boy am I tired, Vegas is a really wild place, it gives a whole new meaning to "It's a jungle out there" and believe me, I've been in many jungles.
The first picture is of me riding to Omaha in dad's car.  I was a good monkey and buckled up.  Dad and I drove with the windows down so we could feel the wind in our hair, wow, that was so cool.  It was great, we were jamming to some loud tunes on the radio, I was singing on the top of my lungs to Jungle Love and The Lion Sleeps Tonight, and one of my favorites "Hey, Hey We're The Monkeys." 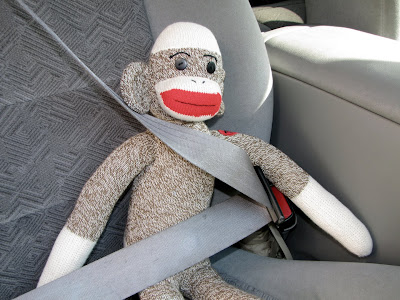 At the airport I got to sit on the window ledge to get a better look at the plane.  I watched the people getting off and on the flights before ours.  This was my first trip on a plane, I wasn't nervous at all, it was exciting.  Dad said he only gets nervous when the weather is bad and he's on too small of a plane to fly above the storm.  He said that happened to him and mom when they were on their honeymoon in California.  Mom wasn't scared so helped dad stay calm, it's so sweet how they take care of each other. 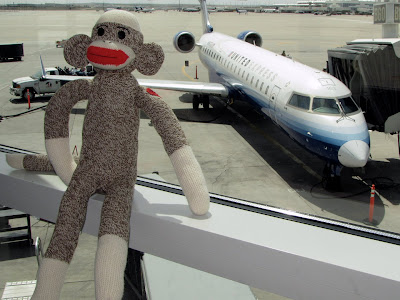 When we boarded the plane, dad and I took our seats, the lady in the front was talking to us about our seat being a flotation device, I asked dad why we would need that since we're flying to the desert. 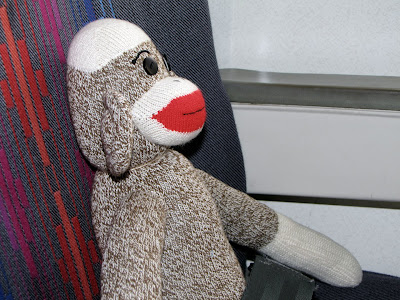 Once we were up in the air, I got to take off my seat belt and look out my window.  Being a bit on the short side, I couldn't see very clearly unless I stood up.  Flying so high is really neato, I saw the mountains in Denver and I saw farms, and small towns and really big cities. 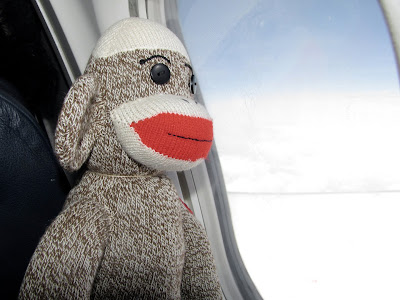 After we landed, the pilot came back to talk to dad, I couldn't really clearly hear what they were saying, but I thought I heard the pilot call me a "handsome young primate" man, he must have really thought I was something, he invited me up to the cockpit and said I could look at the controls, he let dad tag along too, I guess so he could take pictures of me. 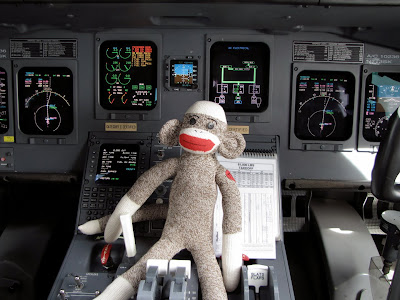 I chatted with the pilot, you know, guy stuff, he must have been impressed with me, he asked me to sit in the co-pilots chair, I'm thinking he might just want me to be his new co-pilot. 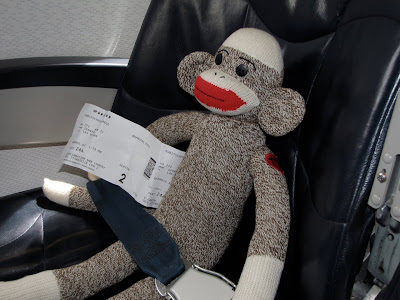 I even got to handle the controls...."Jonah to Air Traffic Control, we are ready for take-off". 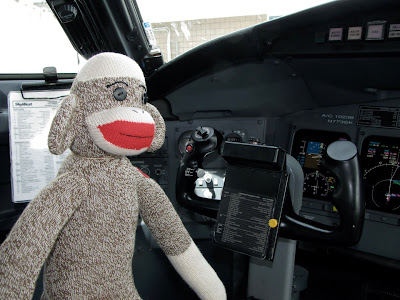 After I was done being schmoozed by the pilot, we had a group photo taken.  As you can see, they were all thrilled to be having their picture taken with me.  I'm guessing they all went home and told their friends and family that they met an exceptionally sweet and handsome sock monkey. 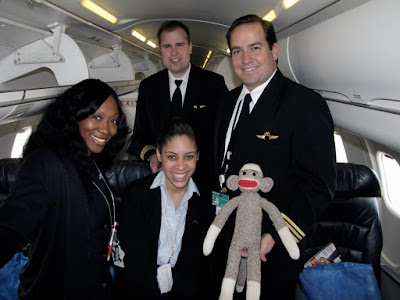 Well, I have plenty more to write about, but I'm going to go have a snack and take a nap

***Note***
Greg and Kelly are not liable for the comments, opinions, or statements made by Jonah, the sock monkey.

Oh my gosh... I LOVE IT!! Jonah, you are something else! I shared the link to your mom's blog so my friends and coworkers could read it, too. HUGS from Texas!

P.S. - Your sister, "Kubi", says HELLO and wanted me to tell you that she is being really well taken care of!

Can't wait to meet you in person! Hopefully that will be soon.

WOW.....sounds like you need help too! LOL
Jonah said he loves you bunches of bananas. Silly monkey